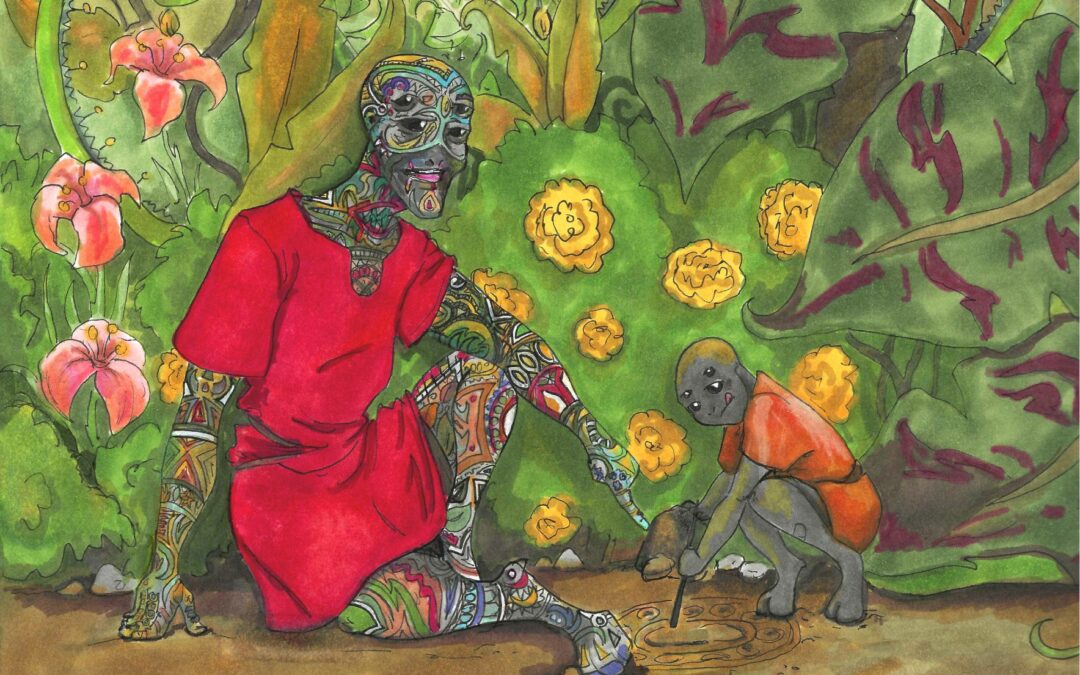 My novel Markmaker releases in just two weeks (what? How did we even get here??). As part of the celebrations, I commissioned my talented friend Monica Chenet to create portraits of my alien artists and warriors. She did an incredible job—I was blown away by the beauty, emotion, and creativity of her work. Below are the seven portraits I commissioned, along with (spoiler-free) intros to each of my beloved characters! 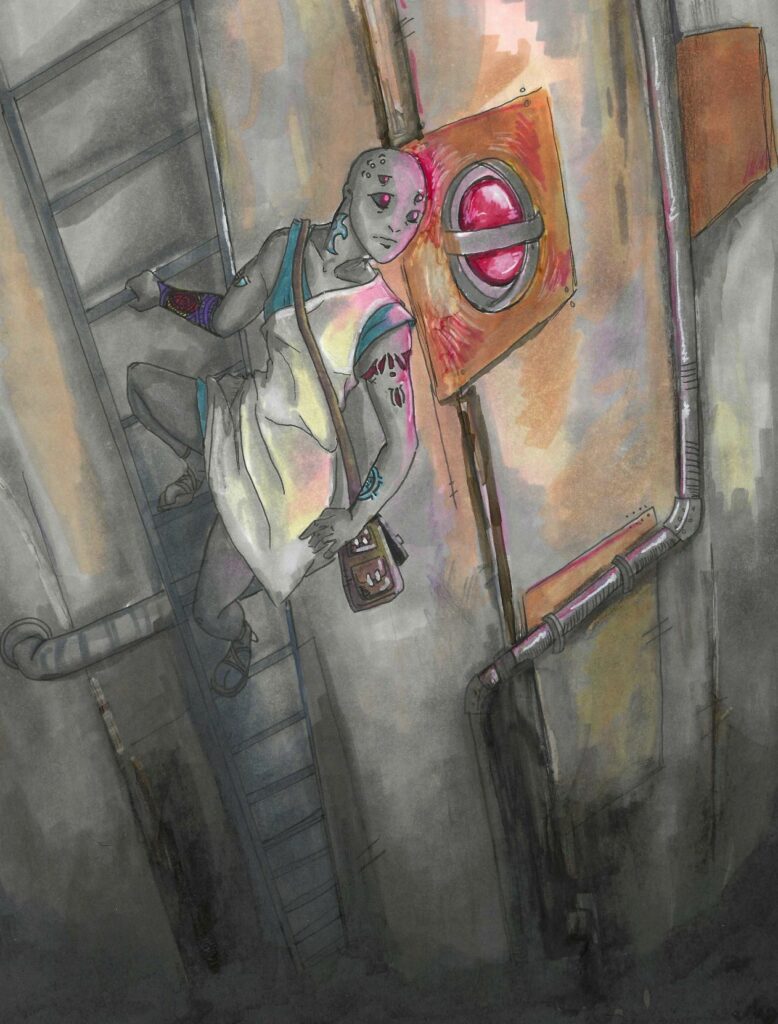 “Whenever I make this journey, I always feel as if I am climbing down into Axdraa’dah, the pit of the Deep Sleep. I would pray to my ancestors for courage, but I do not think they would aid me. Not in this.” ~ Mariikel

Introducing Mariikel Serix, the novel’s narrator and (most reluctant) hero. Mariikel is a tattoo artist for Clan Serix, one of the most prestigious bloodlines in the Noxxiin Fleet. Quiet, hard-working, and compassionate, he is talented at his craft and devoted to the law…so when he’s forced to give a false mark that sends an innocent man into exile, it shatters his world.

This eerie piece shows Mariikel climbing down into the Underbelly to explore the realm of the exiles. I love the depth of the scene, the rusty pipes and ladders, the creeping shadows…and Mariikel himself, terrified yet determined as he descends into the darkness.

This artwork really captures the tone of the book and the heart of Mariikel’s character. He is my angsty alien tattoo artist and I love him. I can’t wait to share his full story with you all in a few short weeks. 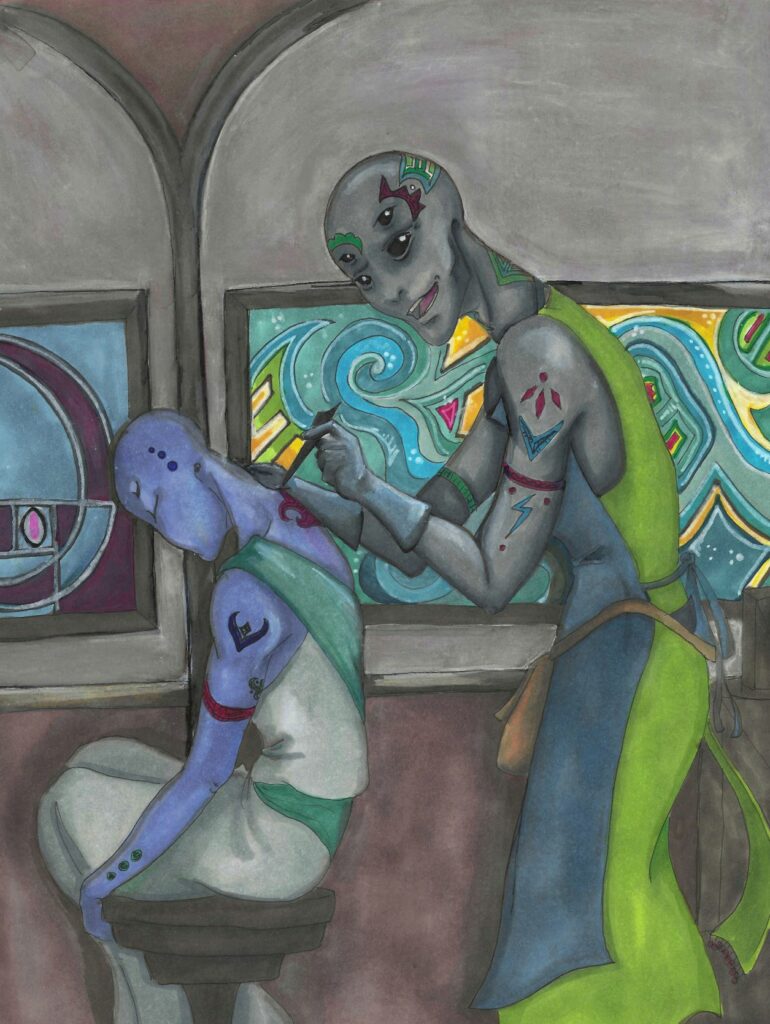 “Mariikel, you are a fine artist. But your neglect of politics is becoming inexcusable.” ~ Kilmaya

Introducing Kilmaya Serix, Mariikel’s teacher and fellow artist. Kilmaya runs a prestigious markmaking studio and is one of the most respected artists on Rixarii Street. Sharp-witted, gregarious, and politically savvy, she always knows the latest news on guild law and clan rivalries. Underneath all the sarcasm, though, she is fiercely loyal to her clan and cares deeply for her former apprentice, Mariikel.

Kilmaya was one of my favorite characters to write—her quick tongue and dry wit made her the perfect foil to Mariikel’s angst. Plus she’s useful to have around when Mariikel is (predictably) oblivious about guild politics. I love the way Monica brought her to life in this beautiful portrait! Her lively smile and poised hands as she plies her trade perfectly express her personality. We also get a glimpse of the vivid murals on the studio wall behind her. The Noxxiin (especially Clan Serix) love to surround themselves with color and beauty.

Although Mariikel is a master artist during the story and no longer Kilmaya’s apprentice, the two of them still have a wonderful teacher-pupil dynamic that was so heartwarming to write. They know each other’s quirks and foibles and love each other like mother and son—which makes Mariikel’s secret crimes even more painful for him. 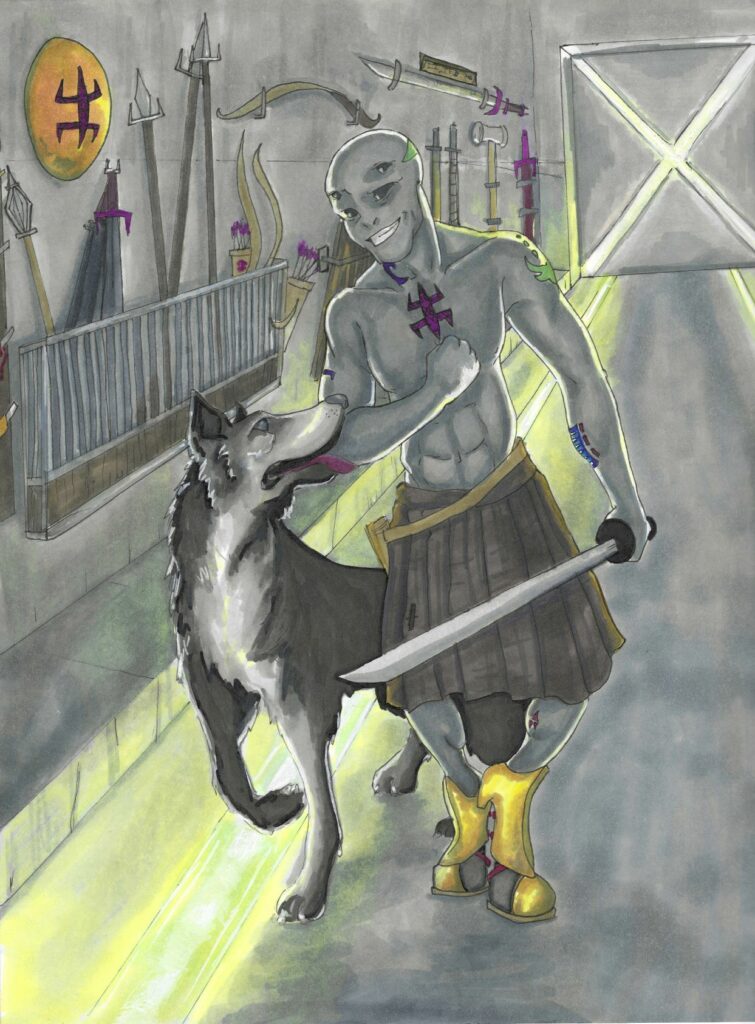 “The only way we are going to take the planets is if all the clans are united. That’s the purpose of the Ascendance. We can’t afford to fight among ourselves anymore.” ~ Askko

I originally invented Askko’s character as a way to introduce the Noxxiin’s war with the half-sights (their term for humans)—but he quickly became a favorite in his own right! Athletic and brash with a talent for getting into scrapes, Askko never quite fit into his family of artists and record-keepers. Instead, he joined the military, pledging himself to the cause of the Ascendance, the political faction determined to reclaim the ancient Noxxiin home planets from the half-sight race.

Askko and Mariikel have a great sibling rivalry: though they’re technically cousins, they were raised as brothers in the same household. Where Mariikel is quiet, methodical, and artistic, Askko is boisterous, hot-headed, and more at home in the sparring arena than the studio. As a result, these two get on each other’s nerves constantly. And their rocky relationship isn’t helped by the fact that the Ascendance and the markmaker guild are going head-to-head in a fierce political struggle.

Deep down, though, these adopted brothers do care for each other, and Askko is a good person at heart. This portrait by the talented Monica Chenet perfectly captures his mischievous swagger and charm…and, yes, his muscles. Showing off the Ascendance faction-mark on his chest and accompanied by his faithful war-hound Miika, he’s ready to meet his fellow warriors at the arena for a brisk sparring match. 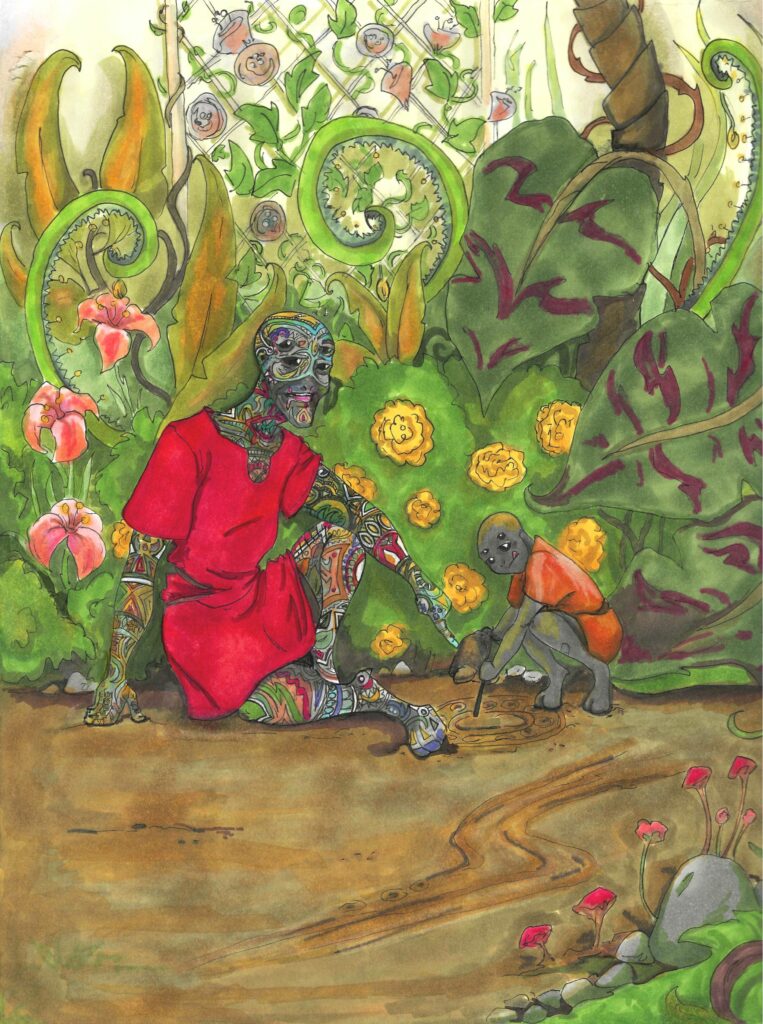 “Hakka, no, Tyotik. Go home to your nakki. The mad markmaker’s house—not a good place for sleeping. You would have strange dreams.” ~ Haza’ruux

An eccentric old hermit, Haza’ruux is one of the “mad markmakers,” a traditional and rather mysterious order of artists protected by Clan Serix. Haza’ruux spends his days making ink, painting tattoos in a script that no one else can read, and playing with the clan’s children in his jungle-like garden. Most people think he’s a little weird, but essentially harmless. But after a seemingly chance encounter with the strange old artist, Mariikel begins to discover there is much more to Haza’ruux than meets the eye.

Tyotik, meanwhile, is the cute kid and therefore everyone’s favorite. But he also has his own (surprisingly important) role to play in Mariikel’s story. You’ll have to read the book to find out what it is.

This portrait might be my personal favorite, because Monica Chenet did an absolutely STUNNING job bringing these two characters to life. I knew Haza’ruux would be challenging to draw, with his entire body covered in intricate tattoos, but Monica pulled it off beautifully! I love his relaxed pose and gentle smile as he sits in his lush, riotous garden, teaching his little friend how to read and write. And Tyotik is literally. The. Cutest. I still can’t get over how adorable he is. 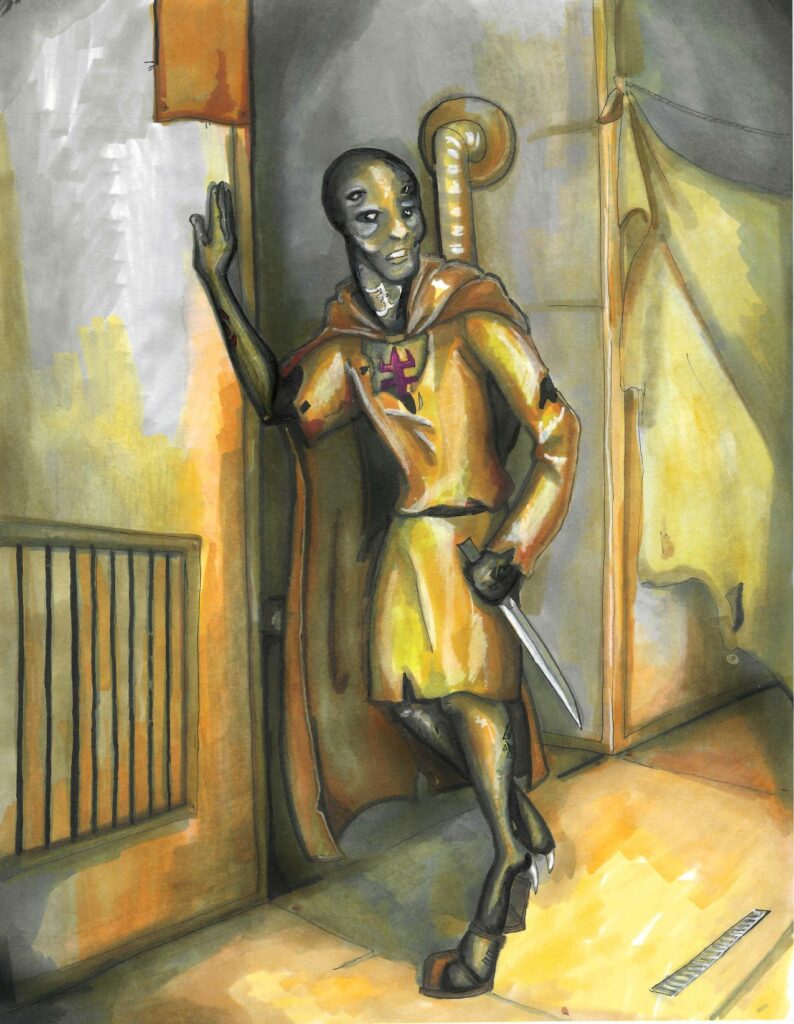 “The world’s not as small as it once was. The planets are within reach.” ~ Kophas

Introducing Kophas Tarriks! Born into a distinguished warrior clan and trained as an Ascendance soldier, Kophas is now an exile, unjustly condemned to a life of slave labor in the Underbelly…unless he can convince Mariikel to give him false marks, which would allow him to escape the Noxxiin Fleet and start a new life on the planets.

Kophas’s request challenges Mariikel to his core, forcing him to grapple with hard questions about truth, justice, and the markmaking tradition he is supposed to protect. The bond that grows between these two unlikely friends is such a poignant part of the story. Kophas is loyal, straightforward, and prefers action over words—traits that get him in trouble with the Ascendance, but also allow him to come to Mariikel’s aid when his friend needs a skilled warrior at his back.

This portrait shows Kophas in his ragged exile’s garb, warily making his way through the Underbelly slums. Once again, Monica did a beautiful job! I love the dramatic lighting, Kophas’s tense pose, and the stark-white mark of exile of his neck. Also, check out those long, curving spurs! All Noxxiin have spurs on their lower legs, but warriors keep them especially long and sharp as a natural weapon. 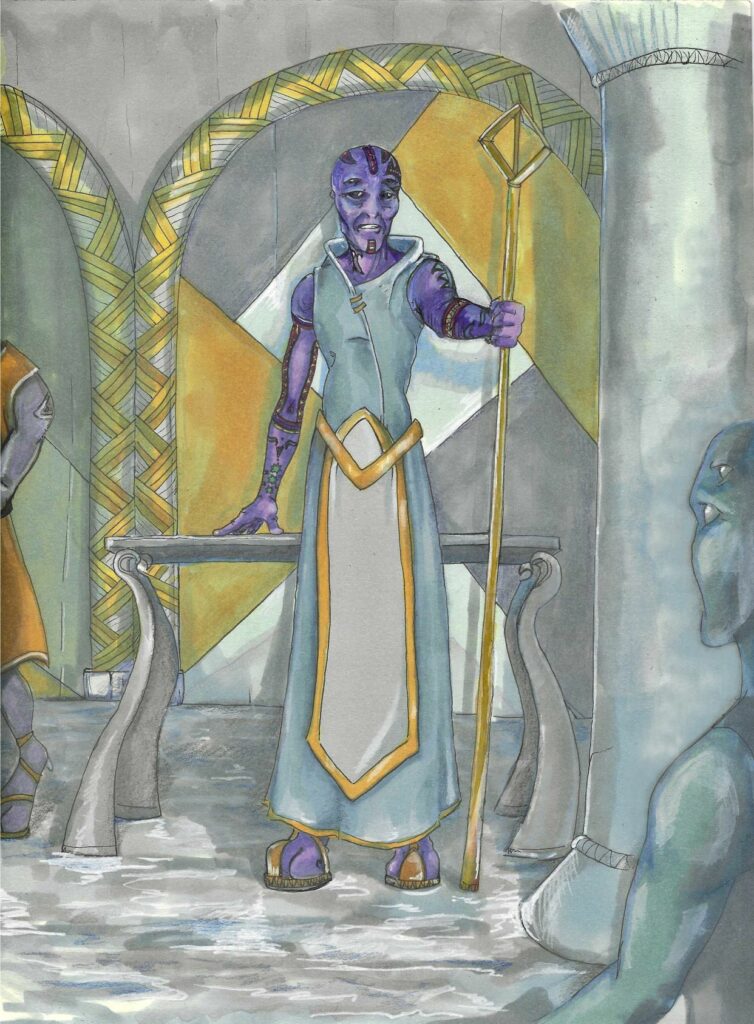 “We are artists! We are hunters of truth. By trade, we are not warriors, but now, Serixan, we must fight.” ~ Mekkalluthak

Introducing Mekkalluthak Serix! As chieftain of Clan Serix and master of the markmaker guild, Mekkalluthak is determined to protect the honor of his artists, even if it means challenging the supremacy of the ruling faction, the Ascendance. His idealism combined with his commanding presence and persuasive speaking skills make him a powerful figure on the political scene. He’s not exactly selfless, though—he has personal ambitions, as well, and is not above manipulating his own clanmates to get what he wants.

Mekkalluthak was another of my favorite characters to write. I had a lot of fun crafting his fiery speeches to the guild assembly—but he uses his charisma in subtler ways, too. Poor Mariikel had to endure several nerve-wracking conversations with the guildmaster, which I enjoyed a lot (Mariikel did not enjoy them at all!). He was such an intriguing character to explore.

Monica did a fantastic job with her portrait of Mekkalluthak. His elaborate honor-marks, long guildmaster’s tunic, and commanding pose set him apart as a stern, powerful figure—not a man to be trifled with!

(And for those who are wondering, it’s pronounced “meh-KAL-oo-thack”—accent on the second syllable. Kilmaya calls him Kallu because she’s known him for years, but no one else dares to call him that. Probably a good thing.) 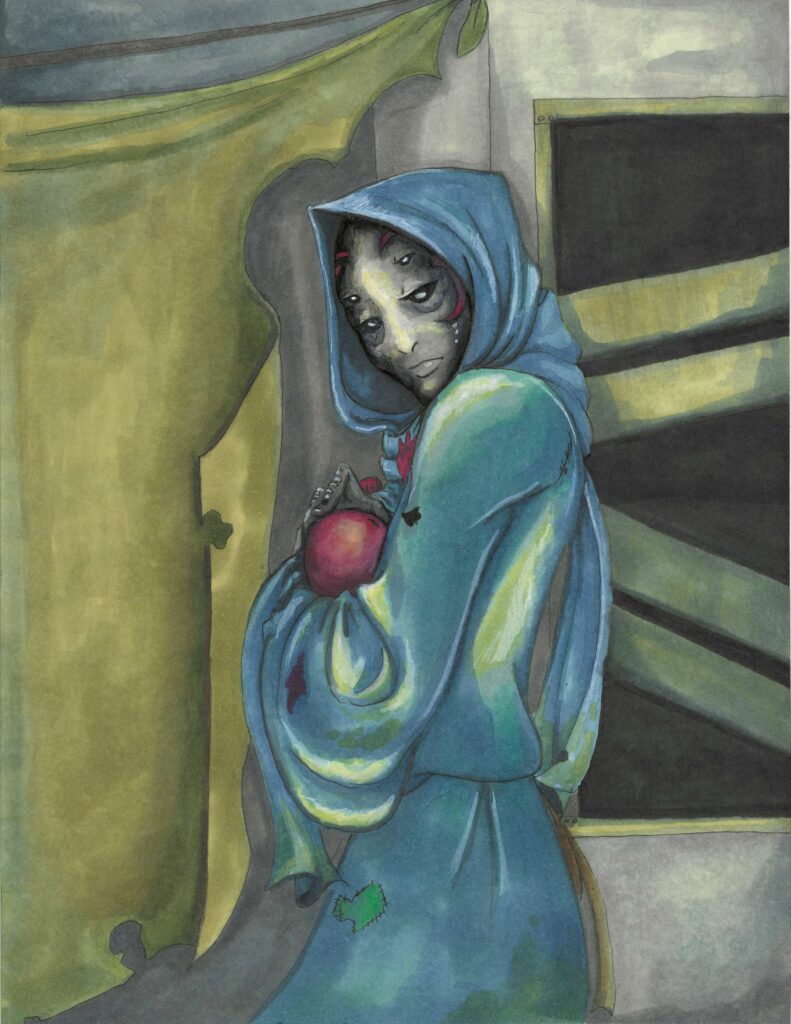 “Why do you come here? Do you think your inks are enough for us, markmaker?” ~ Lakkia

My final character reveal is a lovely note to end on. Introducing Lakkia Penthar, an exile of the Underbelly. Mariikel meets Lakkia and her infant son early in the book, a heart-wrenching encounter that remains in his memory for the rest of the story. Although Lakkia is a minor character—she only appears in a handful of scenes—she is both a guiding light and a challenge to Mariikel as he continues his secret work of serving the exiles.

At this point I’m convinced that Monica is just magical, because she did an unbelievably beautiful job bringing Lakkia and her newborn son to life. I love her vulnerable pose and simple, flowing robes, and the mingled pain, exhaustion, and tenderness in her face as she cradles her child. And the tiny Noxxiin baby hands. It’s too much. I can’t handle it.

I hope you enjoyed meeting the cast of Markmaker! I’d love to know which portrait was your favorite. (Don’t ask me for mine; I can’t choose. They’re all amazing!)

To preorder Markmaker, head to the book’s page at Chrism Press. And to see more of Monica Chenet’s beautiful artwork, go follow her art account on Instagram!